Dependability and tradition since 1970

When Konrad Allgaier started up the "Ulmer Schnelltransport" haulage company, it was the first chapter in a great success story.

The charismatic founder of the company, Konrad Allgaier, learned the transport trade in his day by working his way up from the bottom. The freight forwarding company "Konrad Allgaier Spedition GmbH", which was set up in 1978 by the skilled shipping agent, already had six vehicles to its name by way of a takeover. "There's no such word as can't" was his motto and, to this day, it is still an unwritten rule running through every fibre of Allgaier's being.

It was not long before the hard work, pragmatism and above-average levels of motivation, from the managers and drivers right through to the storekeepers, reaped sustained rewards. Several departments and services were introduced under his management, including forklift hire, document destruction, armoured transport for cash and valuables, which is still a prominent part of the business today, assembly, company removals and packaging.

Sadly he passed away all too soon but the new management led the company into the future brilliantly, perpetuating his genius and ensuring that his values lived on. The construction and development section was formed as well as logistics, assembly and forwarding arms by the names of Allgaier Logistik, Allgaier Montage and Allgaier Translog respectively. These moves and many landmark investments turned the small business into an enterprise with contacts all over the world and a first-class reputation.

To this day all the people at Allgaier still consider it their duty to remain true to tradition. Human values will always take precedence over materialism, and sustainable development will always come before quick profits.

Today Allgaier is down to earth and on the up in equal measure. 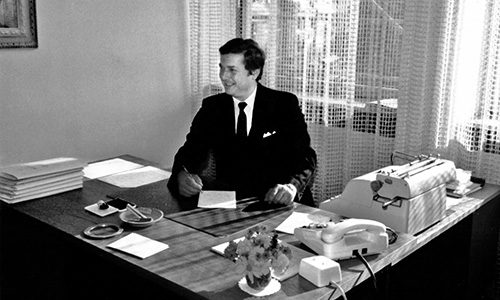